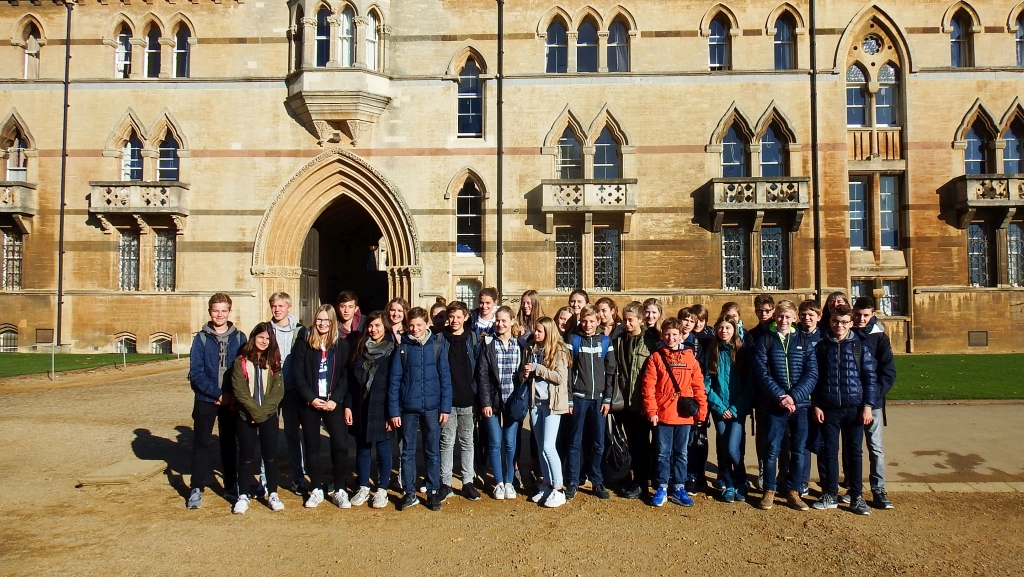 For many years now there has been an exchange programme between Abingdon School, the School of St. Helen and St. Katherine and Ratsgymnasium. This year thirty boys and girls were able to take part in this exchange, from 2nd to 12th October. On some days we went to school with our partners, on other days we went on some interesting trips, e.g. to Oxford.
On the first two days we went to school with our exchange partners. It was interesting to see how different the lessons were in England compared to ours at home. Abingdon School and St. Helen and St. Katherine have very high academic standards. Parents who want their children to attend such excellent schools are willing to pay a lot of money for tuition fees and even make their sons and daughters go on a one-hour bus ride to school every day. The school itself is a lot bigger than ours. There is a big cafeteria, but there has to be one as the school day sometimes only finishes at 5 pm, so everybody has lunch at school.
On our first trip we went to Oxford, where we visited Keble College and the Natural History Museum. On the next day we went to Portsmouth. There we visited two beautiful ships, the HMS Warrior and the HMS Victory, which were both very important in the history of Great Britain. The next day was the last time we went to school with our partners for the entire day. On Monday we visited Stratford, which is the town where Shakespeare was born, and we saw his birthplace. Afterwards we went to Warwick Castle, where we were able to see a falconer’s show. On the last day we went to Oxford again. This time we visited one of the most important colleges in Oxford, Christ Church College, where some scenes of the Harry Potter films were taken.
At the weekend we had some time with our host families. Many of us went to London and some went to other cities like Reading. British family life is a bit different from ours, too. For example they have dinner much earlier than we do, and sometimes they eat while they are watching TV, which was a bit confusing to me at first. Normally, British meals do not differ much from German meals, but on one day my family was kind enough to offer me a traditional English breakfast. On the whole, even if there are some differences, British family life is quite similar to ours at home.
All in all, I think the time in England was a great experience for all of us and we are looking forward to seeing our exchange partners again in February when they come to Bielefeld.