by Justus Keitel and Julius Ohletz

For many years, the Ratsgymnasium and Abingdon School have been cultivating their close friendship by means of an annual exchange programme. This year, 30 pupils (9 girls and 21 boys) participated. It is  a special year because both countries, Germany and the United Kingdom, are celebrating the centenary of the outbreak of the First World War. In this context, both our schools planned and organised a special project with a presentation and an exhibition. Let us tell you something about our experience at the boys' school, Abingdon School.

As already mentioned, we worked on a joint history project this year. Five boys from the Ratsgymnasium and their exchange partners did some research in their countries on information about people and their life stories during WWI. In Germany, we went to the Bielefeld town archives and found some very interesting documents from this time. For example we had a look at the original final exam papers in German written by the Rats pupils. They had to write about Germans' role at that time and what they thought about it. We collected a lot of information and material and presented them to the English students on posters. Together we worked out that the students one hundred years ago also thought critically about the war. In both countries students shared the same ideas. Furthermore, people's problems were pretty much the same, e.g. both countries respected and feared each other's power. I, Justus, had not expected that and I was really surprised. Together we contributed to  a Power-Point-Presentation, for which we, the ten Anglo-German project pupils, read out some original wartime texts and presented them to the whole of Abingdon School during an assembly.

Abingdon School is an independent, private boys' school. The catchment area is really big. It is normal that it takes a student about one hour to get to school. Pupils are taught in courses or sets, so the students have no classrooms but rather house rooms. In those house rooms, like in the houses in “Harry Potter”, pupils from all ages meet in their breaks. Each house room is different. The school is really well-equipped technically. So in every room there are a smartboard and about seven iMacs. The school is expanding all the time. At the moment, they are building a new science centre. If you want to see something of the school, we recommend going on their virtual tour (http://www.abingdon.org.uk/virtual_tour/). The school offers a great variety of sports activities. Every pupil has to do at least one sport activity after school. We were able to attend lessons on three days. In these lessons, we found out that they are not very different from our German ones. The level is quite similar to ours.

Each student from Germany, of course, stayed in his or her partner's family. All of us were spoiled a lot and everyone was very happy with his or her family. We spent the weekend together with our families and they were so kind as to show us some interesting sights or cities in the region. Most of us went to London with their families.

Together with the other Germans we went on some trips, for example to Stratford, which is William Shakespeare's birthplace, to Warwick Castle and to Portsmouth, where we visited the HMS Warrior, the HMS Victory (Lord Nelson's ship) and the Mary Rose Museum. Of course we also visited Oxford. In Oxford we saw Keble College, Christ Church College and the National History Museum.  On each excursion we also had some free time, so we were able to have a look at other places in the cities. We really enjoyed these trips.

After ten days we had to say goodbye to our new friends in England and had to go back to Bielefeld. For the last time, we gave the white cliffs of Dover and Great Britain a wave. It won't be our last time to come over to Britain.

All in all, the exchange was a really nice experience for us and we are happy that we were given the opportunity to take part in it. 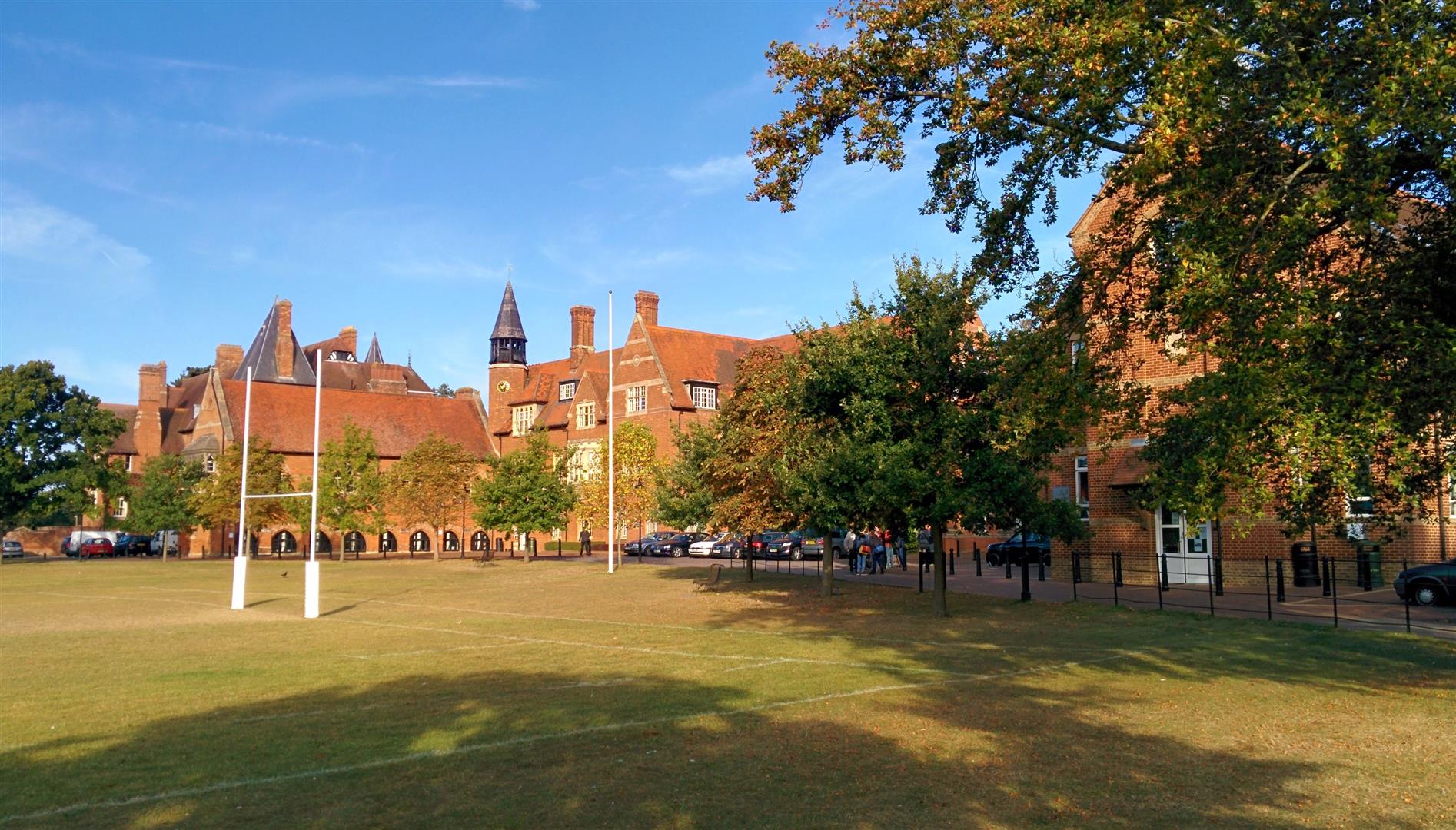 We left Bielefeld on Sunday 28th September at 5:30 am. We traveled by coach and ferry and arrived at Abingdon at 6:15 in the evening. There we waited for our partners (we were a bit too early as this time there had not been a traffic jam). I was very excited while we were waiting for them, but when they arrived they were very friendly and nice, so I should not have worried at all! I spent the rest of the evening with my host family and I told them something about our journey.

The next day was our first school day, for the boys in Abingdon School and for the girls in Saint Helen & Saint Katharine (SHSK). At SHSK most of the pupils arrive at 8:30 am on school buses. So school starts later than at Ratsgymnasium, but it takes some pupils an hour to get to school. Then they go to their form teacher's room. At 8:40 am, the form teacher comes in and checks the pupils’ attendance. Sometimes the class has assembly with the other forms of the same year, but that day they had not. In the big assembly hall, a teacher explains something to the girls or discusses something with them. At 9:10 am the first lesson starts, but we German pupils went to OSH, the old school hall, because two older pupils wanted to give us a guided tour of the school. St Helen's is bigger than Ratsgymnasium, but the rooms are smaller because in a lesson there are less pupils than at Ratsgymnasium. SHSK has many different rooms and even a drama studio for drama lessons, a dance studio, a fitness studio or many little rooms for private music lessons. A lesson takes 35 minutes and most of the time the pupils have double lessons because there is no break between two lessons. After the first two lessons there is a little break of about 10 minutes. Then we met our partners and accompanied them to their next classes. After two following lessons, at 12:00 am, there is a big break, in which the pupils have lunch in the school cafeteria, which we had not expected to be as tasty  - really yummy! During the lunch break some pupils do activities like badminton or choir for 30 minutes. At 1:30 pm the next two lessons start and then there is a break of about 20 minutes. Afterwards they have two lessons again. School  finishes at 4:05 pm. After school some pupils do some extracurricular activities like drama, tennis, etc. Then they go home on the school bus or are picked up by their parents. The school day in SHSK is very long and after school they also have to do much homework, so I am very happy that our school day is not as long as theirs and that normally we do not have to do as much homework.

On four days we went on some trips, for example to Oxford, Portsmouth, Stratford, Warwick and once again to Oxford. On the trips we visited some great  sights and had a look at the cities and the buildings, but we also had some free time, during which we could go shopping. I liked the trips to Oxford very much because the colleges we visited were very interesting and the buildings were very beautiful and impressive.

At the weekend we were in our host families and spent our time with them. Most of us went to London or Oxford, visited some sights or went shopping. One of us even went to Birmingham to the big Hindu temple because her partner's family are Hindus. My partner`s family took me to London, where we visited Chinatown and watched the musical “Miss Saigon”; this was very nice of them and I liked the musical very much.

Tuesday was our last day and on Wednesday we went back to Bielefeld. The ten days were over too quickly and now we are looking forward to February, when the English pupils come. We have already got some plans for what we are going to show them. 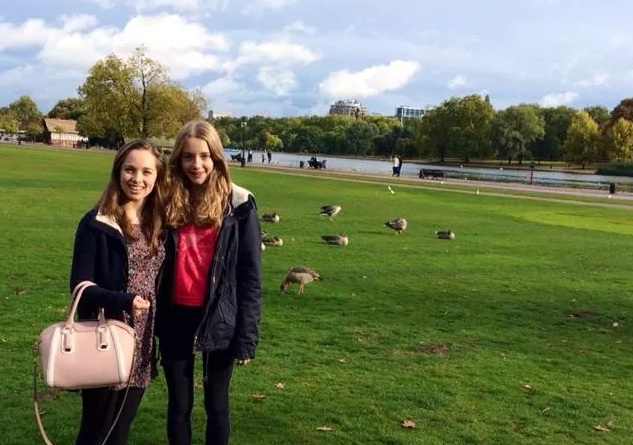