Abingdon 2009: The HMS Warrior and the HMS Victory

The HMS Warrior is a ship we had the opportunity to see fairly recently in Portsmouth, on our Abingdon exchange. On Friday 10th October 2009, the German group set out on a trip to Portsmouth, one of England’s most famous, most important and most historical naval cities. 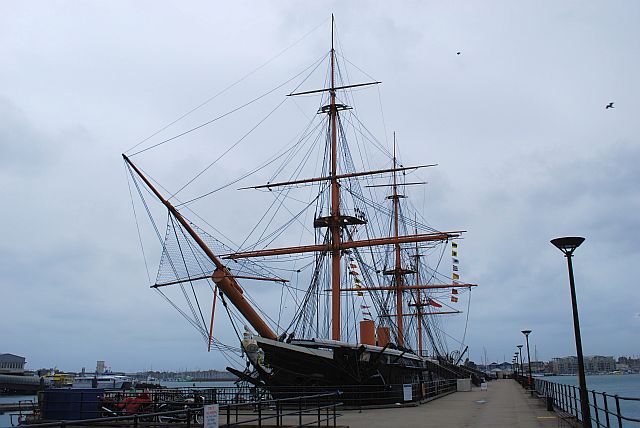 The HMS Warrior was ordered in the year 1859. This ship, which is still worth £170, 000, was built for the United Kingdom’s Royal Navy and is still their official property, although it’s currently used as a museum ship. What is so special about the HMS Warrior is that this flagship was the first iron-hulled and iron-armoured warship of the Royal Navy and also almost in the whole world. Once it had been completed, which was in the year 1861, it could  easily be called one of the most revolutionary ships of its kind at that certain point of time. It was indeed by far the largest, by far the fastest and by far the most heavily-armed and most heavily armoured flagship the world had seen. Another point is that – in contrast to what   many people nowadays think – the HMS Warrior was not built using ANY radically modern technology, but for the first time it combined steam engines, loading guns, iron construction, iron armour and propeller drive in one revolutionary warship. 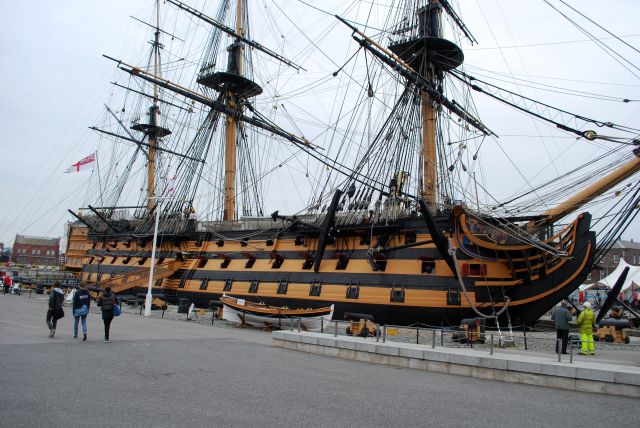 The HMS Victory, which we could also see and explore on our day spent in Portsmouth, is another great and maybe historically even more important flagship than the HMS Warrior is. This flagship   is the property of the Royal Navy and was therefore used in the historical and important Battle of Trafalgar. It was the official flagship used by one of England’s most famous admirals – Admiral Nelson.

The HMS Victory, which was ordered in 1758 and launched  in 1765, is also one of the most highly developed flagships of its time. Considering that the other ships that took part in the Battle of Trafalgar looked really good, Nelson’s personal flagship beat them all in the aspects of functionality, beauty and design. Seeing what the ship is constructed like in the back part, you can easily guess that this was the spot where Nelson lived himself at the time of the battle. Once you have taken a look inside, you will be even more impressed. The furniture is carefully selected, the design is really beautiful.

This ship was also the place where Admiral Nelson, whose statue can still be seen in famous Trafalgar Square in London nowadays, died. A couple of moments before his death, though, the crew told him that the battle had been won, which was true. Therefore Nelson died with a feeling of success.

On 12th October, we left Bielefeld to experience England and especially Abingdon. It was a very exciting time with lots of adventures and fun. But I do not want to anticipate anything. When we arrived in Abingdon, we were all very tired, because we had already left at half past five in the morning that day. But there was not much time to relax, we had to go to school the next day. After a short night (some of us were supposed to get up at six a.m.) most of us enjoyed the English way of school. After a more or less short time in the common room ( the school is subdivided into houses, every house has an own common room, where everyone can play pool or do the remaining homework for the day), we went to the lessons with our partners. 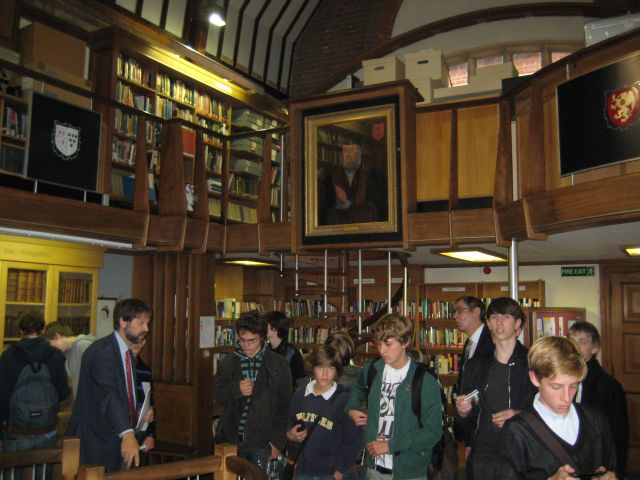 The English style of education is very different to the German one. The teacher speaks during the whole lesson and everyone has to be quiet. Some of the classrooms were full, so we had to stay in the common rooms and played pool or listened to music most of the time.

On the next day we went on a trip to Bath. Mr. Revill, an English German teacher came with us. Bath is such a beautiful city with many impressing sights, like the Roman Baths or the Royal Crescent. Some people actually say that it is one of the most beautiful cities in the world. After one normal school day and the extraordinary experience of a school without girls we went to Oxford, where we were able to visit Keble College, led around by two students of German.

The next day there was no school but again a trip, not to Oxford, but to Portsmouth. We visited some ships, the "Warrior", a two-hundred-year-old ship, which has never taken part in a battle, and the "HMS Victory", the ship of Lord Nelson, who was the man that beat Napoleon in such away that Napoleon had to give up a bit later. At the following weekend we did something with our partners' families; some of us went to London and some of us just stayed at home. On Monday we had again just a normal school day. On our last full day in England we made a trip to Oxford again, to visit Christ Church College, where the " Harry Potter" films were made. And the next day was already our last day in Great Britain. To conclude I can say that our trip to England was at least a great experience that nobody would want to miss.